How Netflix is Reinventing HR(again).

Full disclosure here: I’m a workplace culture junkie.  I am. I admit it.  I also feel you deserve some context so that term doesn’t sound so….well….strange.

I used to coach baseball and I was pretty good at it.  There’s something about building a team towards a singular goal that was so worthwhile.  The payoff wasn’t just the “W” at the end of a game or a championship at the end of a season.  The real reward was the team itself.  It was the player’s development, growth and ultimate achievement that made me happiest as a coach. Okay, so maybe I wanted to win badly too.

It was through coaching and building teams that I learned about the “culture” of a team.  I wanted to learn as much as possible, and in my quest to gobble up as much info as I could, I randomly came across the The Netflix Culture Slideshare. The seminal document about workplace culture of the last 20 years.

If you’re in HR, you probably know what I’m talking about.

What sparked it all.

In an HBR article written in 2014 by Patty McCord, former Chief Talent Officer at Netflix, you get to see the Slideshare, and read about what went into the document that changed current workplace culture as we know it.  Pioneered by early Silicon Valley startups, but most famously put into powerpoint slides in 2001 by McCord and the founder and CEO of Netflix, Reed Hastings, these slides serve as a de facto 21st-century workplace manifesto.

And with good cause.

Because of this document, and the example the then young startup set themselves, a whole industry of workplace culture startups sprang up.  Most importantly, HR leaders slowly began to realize the tides were changing and they needed to get ahead of the curve.  Fast. And it was on this 124-page document where many HR leaders quickly learned the very steps to change the status quo before it changed on them.

It was also about then that I began my coaching career. Searching for information, I regularly searched on the internet, scouring webpage after webpage, looking for better ways to motivate my team. I quickly realized I wasn’t alone. I found the Netflix Culture document and read it, then re-read it.

It was also on those pages where I first read about how to build culture through people, build core values that mean something, incentivize performance more effectively, increase communication, decrease inefficiencies, and learn how to leverage data for the better of the entire team.

But then it all changed.

These days, I regularly search the internet.  I’ll read studies, documents, videos, and learn about individuals who are building up the world of HR.  It had been some time since I’d last read the Netflix Culture statement, so one evening I thought I’d go to my favorite bookmarked page. 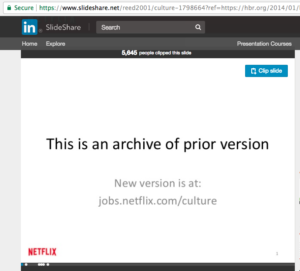 It only took a second to realize the original document had been archived and there was a link to a new version.

You can imagine my excitement at learning there was a new version and I fully suggest you clicking here to read it yourself if you haven’t done so yet.

What I took away most.

Much of what the original statement stood for is there.  The core philosophy is powerful, the pride for their success is on display, and most excitingly, their core values are listed early. However, there’s something here that is telling.

CHECK OUT THE AMPT GUIDE TO BUILDING EMPLOYEE RECOGNITION

You can read into the motivations and aspirations of a company by looking at both what and where certain info is placed.  The original document was an internal resource for Netflix, a Silicone Valley legend, and most importantly a LinkedIn Slideshare.  And while the essence of the original document is there, what’s most telling is the fact that the document itself isn’t shown as a document but instead as a webpage.  Why is that telling you ask?

Because Netflix has realized what many amazing leaders realize, that if done right, your workplace culture can be an extremely powerful way to attract and retain employees and you should proudly display that.

For the first time in modern history, culture or human talent competition has surpassed any other priority amongst leaders of the biggest companies on earth.  And it’s this shift that has caused a ripple effect throughout the HR and talent communities.

This is why I took particular notice of the new Netflix culture statement.  Proudly placed on a webpage for all to see, the leaders of Netflix have realized the power of a “cool place to work” where employees are valued for the talent they have and the people they are.

They’re realizing that they can attract the best talent, not by better insurance plans, perks or even salary- it’s workplace culture that gets your best hires.  Which is why the best HR leaders realize the very philosophies, strategies and values that constitute their workplace’s culture must be proudly on display for all to see.

What can you learn?

How can you take advantage of this trend? It all starts with how much you value the people and culture of your workplace.  Ask yourself how much of a priority your people are. If your answer is anything but “it’s one of (if not the) most important priorities” then there might be a problem.  Good thing you have us to help.

But if you do take workplace culture seriously and you’re investing in your people right now, then it’s time to assess how you can use those efforts to outwardly advertise about your culture.

Here are three easy ways you can start making your culture a force TODAY:

By the way, if you or your organization has a document that you’d like to highlight or share with our community of thousands of leaders on AMPT, please contact us.  I’d love to chat about your strategies and how they affect your empl0yees.

Our AMPT resources page will provide you with the latest in employee engagement, recognition and organizational effectiveness.