Confessions of a habitual meeting waster

Meetings suck the lifeblood out of the worker (and other observations, plus a free best-meeting-ever template)

As an employee, I loathed meetings.

I would sit like an obedient Golden Retriever as my boss shared information (that we already knew), corrected our behavior (that we did not exhibit), and worst of all, reviewed expectations (that we already met).

I would scream inside: “Please let me out of this hell that comes every Wednesday at 10 a.m.” What was worse, the value I received from these meetings amounted to the lint in my pocket. 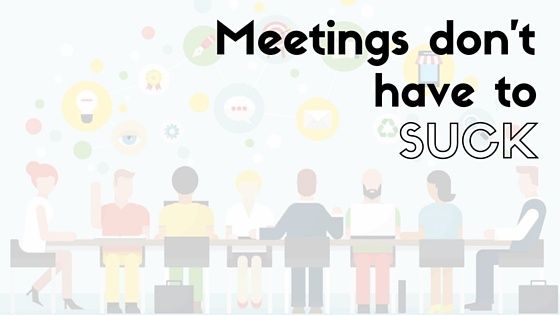 It was right there in those meetings that I swore to myself that if given the opportunity, I would end meetings once and for all.  You heard me right: END THEM.  So, why did I fail so miserably?

My thought was simple: If I had to conduct a meeting, it would be so productive that my employees would fight for more meeting time.

They would show up and actually be engaged. I would fundamentally shift the paradigm of the “wasteful meeting” into something people would be rabid for.  Lines would wrap around the conference room to get in.  I would end the dreaded meeting like some meeting martyr.

As a new supervisor, I fell into the same traps that my former bosses had. Meetings, in theory, are supposed to create a connected workforce so I felt the need to schedule meetings to keep our team on the same page.  But I’d just do it differently.

Then something happened. I started to resent the meetings that I was responsible for leading just because they were required.  If I didn’t want to be there, how could I expect my employees to be there?

“I had to try something different.

“I had to refocus.

Scheduling meetings for the sake of “scheduling meetings” is the #1 mistake leaders can make (when it comes to organizational skills).  Most employees state that a majority of the meetings they attend could be avoided with better communication.  As leaders, we sometimes assume that teams aren’t connected if they’re not actually around each other but this is false.

The paradigm shift I was seeking had eluded me. I had to try something different. I had to refocus.

Be honest with yourself first.

After realizing I was scheduling unnecessary meetings, I decided to evaluate the actual content of the meeting.

Do you keep notes?  Do you actually review them?  Have you timed your meetings? Going back and reviewing meetings or soliciting feedback could help you crack the code to a better meeting.

What I learned was that my meetings were focused on what was not working, what people did not know, the behaviors I was not seeing, and the expectations that were not being met.  In short, I spent most of my meetings letting my team know what I didn’t like (just like those meeting organizers before me).

I had to ask myself the question: who in their right mind would want to come to a meeting like that? Certainly not me.

After re-evaluating what my meetings were like to actually attend, I shifted the focus and I had a breakthrough.

If I was going to force my employees to a meeting, we were going to focus on what was working.  We’d pay attention to behaviors were driving their successes and then take the time to actually celebrate those successes.

So, I started every meeting with recognition of success.

The recognition didn’t just come from me as a leader, but by encouraging the team to recognize each other. We celebrated that success as a team.

By focusing on the positives and successes the team began to focus more of their energy to achieve even more success. They began to see that what was most important was completing tasks by repeating the behaviors they saw being celebrated in our meetings. It was infectious.

READ MORE: Learn how to Recognize like a Champ

The focus of my staff or management meetings also changed.   As a result the focus of my managers began to change as well.  They saw that time spent recognizing their employees was as an effective use of their time as anything and I recognized them for that.

We didn’t just do “Rah Rah Rah” stuff either

I know what you’re thinking. Meetings just to “pat each other on the back”?

What about the training, problem solving, and coaching that had been a part of so many previous meetings? Did we just scrap it? Did they become less important? Did I all of a sudden ignore the challenges and performance problems with employees?

I just made the conscious decision to address them at the level where they could be addressed.  You see, one of the other major benefits of recognizing employees for their successes is that trust is increased and important critiques or changes were seen as genuine and not nagging or worthless.  It’s important to address issues if you see them.

If I needed to share information, I shared it. If a problem needed solved, I would put together the right people to solve it. If an employee needed coached, I would coach them and not the team. If some team members needed training, I would set up training sessions for those who needed it.

And as a result we would leave meetings feeling productive.  Let me repeat that – my meetings became productive.

Want to know something else? Something quite remarkable began to happen. I began to look forward to staff meetings.

And so did my team.

Want to craft the perfect meeting yourself?

Just DOWNLOAD this simple template I created to manage my meetings.  It’s simple.  I even uploaded it in Word format so you can edit and change it yourself (The best leaders “copy” and make it better”).

ALL CAPS LINK TO DOWNLOAD AWESOME MEETING TEMPLATE (no strings)

Next StoryWhat Pokemon Go can teach us about motivating millennials

Our AMPT resources page will provide you with the latest in employee engagement, recognition and organizational effectiveness.